Acclaim’s latest of its All-Star Baseball franchise will release for all console platforms including Xbox, and will be known as All-Star Baseball 2003. The current crop of information details approximately 10 different play modes. These modes include exhibition, expansion, home run derby, all-star game, and franchise, amonth a few unnamed.

The expansion mode has 11 expansion stadiums out of 50 stadiums available throughout the game, and it allows you to choose a city and one of those eleven stadiums. There’s also a logo for a brand-new team that can be added to the major league ranks, and these expansion teams are built through a special draft allowing players to sign minor leaguers and free agents.

For more information on the game, check out GameSpot’s first look.
Source: http://gamespot.com 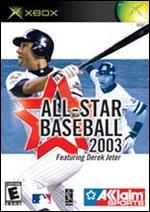