January 2002 (Newstream) -- THQ Inc. (NASDAQ NMS: THQI) has unveiled Toxic GrindTM, a story-driven, mission-based BMX game for the XboxTM video game system from Microsoft and Nintendo GamecubeTM. Set in the year 2097, players will assume the role of BMX rider Jason Hayes who has been forced to ride for his life with other riders on the set of a sadistic television game show titled Toxic Grind. Toxic Grind is scheduled for release in the second half of 2002.

"Toxic Grind is a unique take on extreme sports thanks to the game's compelling storyline that immerses players into a sinister and futuristic world where players must complete various challenges in order to survive," stated Michael Rubinelli, vice president, product development, THQ. "In addition to performing outrageous BMX tricks, players must find keys to deactivate bombs, sink battleships and even destroy a helicopter to progress through various stages of each world."

Developed by Blue Shift, Toxic Grind is a mission-based game set in a dark futuristic world where BMX riding is forbidden and punishable by death. As time traveling Jason Hayes, the player and other rogue riders are injected with a deadly poison by the maniacal game show host, Dixon Von Blass. With poison in their veins, Hayes and the other riders are forced to compete as contestants on a show where death equals ratings. The doomed riders must complete objectives, avoid deadly obstacles and pull off insane tricks in order to survive the most lethal game show ever created.

Toxic Grind features 14 diverse worlds, each with different themes set to locations of the past, present and future. Areas include a futuristic New York City, the ancient Roman Coliseum and the mysterious Bourbon Street of New Orleans. A dynamic playfield enables gamers to contend with ramps, moving platforms and grind rails that change shape or rotate to expose hidden areas. The game's storyline unfolds through comic book-style cinematics that maintain the feel of the twisted world that Toxic Grind exists in. Two-player competition will allow riders to compete head-to-head through seven levels of action and adventure. 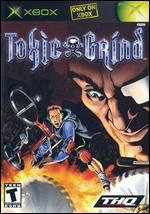 Xbox one no signal
Post by debrartin
0 Replies, 102554 Views