Microsoft today announced that Nightcaster has appeared at retail locations throughout North America. As the wizard Arran, players will harness the power of over 40 different magical spells from the four schools of Fire, Water, Light, and Dark. Nightcaster is available in stores now, exclusively on Xbox, for an estimated retail price of $49.99 (U.S.). Nightcaster has an ESRB rating of "T" for Teen. For more information, visit the official site at: http://www.nightcaster.com.

Nightcaster is a fast and furious action adventure game featuring intensely addictive real-time spell combat and exploration. You play as Arran, a young boy chosen by the force of Light, who grows in age, skill and magical powers as he progresses throughout the game. Throughout his quest, Arran must find and learn over 40 different spells for combat against more than 30 different types of enemy creatures. Arran's ultimate goal: to defeat the forces of Darkness and bring light back into the world. 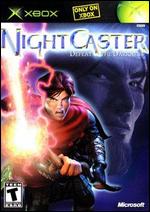