"Outlaw Golf" Also Features the Most Advanced Golf Engine Delivering Graphics So Rich Players Can Smell the Cut Grass NEW YORK--(BW SportsWire)--Feb. 7, 2002-- The first golf title for the Xbox(TM) video game system from Microsoft will make its debut this April complete with strippers, biker chicks and the most advanced golf gaming engine ever made.

"Outlaw Golf" (Rated: "RP" by the ESRB; $49.95 estimated street price), will be a hardcore golf game with a humorous side that takes gamers to three different courses where you’d never find PGA members.

With a hardcore physics engine and a take-no-prisoners attitude, OUTLAW GOLF takes the sport to the extreme. Try your game on one of these outrageous courses:

Crusty Leaf Country Club - Remember the Civil War? They do. So look out for stray bullets and trailer parks as you head South - where the loveliness of the golf course is offset by the ugliness of certain local denizens. On the bright side, if you’ve had a hankering for your first cousin, here’s your chance to get married properly! El Diablo Country Club - Golf in this desert setting and do your part to wreck the environment. Enjoy the low flying blimps, which are no more garish than the residents, and stop in to visit Grandma and Gramps when you finish your round. CHARACTERS

Only the finest individuals could golf on these courses. Choose to be:

C.C. -- Growing up around six brothers meant CC learned early in life to kick major sports-ass and wear dresses later. This curvaceous and ultra-competitive Tom boy can dish out a delicate chip shot or a vicious roundhouse kick to her good natured, tubby caddy, Heavy G. By the way, don’t ever call CC a Tom boy to her face or you’ll be looking out of your ear. Doc - Taking time off from his busy surgical and malpractice schedule, Doc Diggler never passes up a chance hit the links... even if it costs a few patients their lives. Lugging clubs for doctor slice is his brain-dead caddy, Toast. El Suave - Hailing from the most sexy, exotic locale on the planet - Tia Juana - El Suave is the only golfer ever known to be able to pose before, during and after a golf swing. Carrying the clubs for this Latin Lover of himself, is the ultimate brown-noser, golfshoe-licking toady, El Ramon. Harley -- Born in a motorcycle repair shop, Harley grew up with a crowbar in one hand and a golf club in the other. Harley perfected her golf swing beating up boyfriends and relatives. She is currently living in a van with her fellow hog-riding, tough-yet-tender boyfriend and caddy, Snake. Harley can frequently be seen on TV, usually being handcuffed and hauled off by local police for disorderly conduct. Ice Trey -- Hailing from the rough and tumble, crime-ridden inner city streets of Beverly Hills, wannabe rapper, Ice Trey, dropped out of school to pursue his dream of rapping and playing golf -- a decision that was about as promising as his single digit S.A.T. score. Caddying for Ice Trey is his one-man posse, spinner and tattoo consultant - Fresh Fruit. Killer Miller -- Just released from prison strictly on technicality, Killer Miller takes pride in his long game and his short temper. At 6’ 5`` and 275 pounds of angry, rippling muscle, Killer puts on quite a show -- bringing new meaning to the expression "slaying his audience.`` Toting Killer’s clubs is his caddy, confidant and twenty dollar an hour shyster attorney, A. Lance Chaser, Esquire. Scummy O’Doole -- When he’s not out swinging his niblick on the back nine at St. Andrews, legendary soccer hooligan and world-class barroom brawler, Scummy O’Doole, likes to kick back and pass out in his own vomit.

Summer -- Hailing from the Big Apple, where she splits her time between PHD studies in molecular biology at Columbia University, and entertaining foreign businessmen in the champagne room of the Pink Flamingo, please welcome sultry Summer, and her equally ample caddy, Autumn. Remember gentleman, after the game these ladies will be available for autographs... and lap dances. Bring plenty of singles. Trixie -- Trixie has been playing golf at private clubs ever since she was a wee little snob. Dumb as a ball washer and ruder than a slicing drive, Trixie’s handicap is her mouth. She hails from quote-unquote ``none of your business, USA." Carrying Trixie’s bags is her deep-pocketed and dirty old caddy, Ed. Mistress Suki - Hitting the links, literally, is one tightly-laced, leather-clad golfing diva whose game is all about discipline. Inflicting maximum punishment on every ball she hits is Mistress Suki, assisted by her bruised and battered, but amiable 300 pound whipping-boy caddy, Puddin’. Watching these two out on the course is an excruciatingly exciting experience. DRIVING RANGE Use the Range to practice skills and improve your character’s statistics. There are many different exercises to improve putting, driving and accuracy. Note that you may need to unlock better clubs in Tour Mode to successfully complete some events. After completing an event, you’re awarded skill points to distribute on a selected character.

In OUTLAW GOLF, you’ll also experience our scientifically-perfected "composure response system." The better you play, the smoother the controls become; but the worse you play, the harder the controls get -- just like in real life, the worse you play, the harder it is to regain your composure and focus. But don’t worry because the CRS helps you regain your composure in two ways - first, by focusing, concentrating, and getting your game under control, and if that plan fails - by beating the snot out of your caddy! 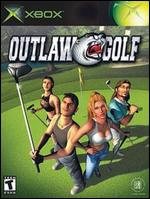