More on this when it becomes available, however, it has piqued my interest.

Crave Entertainment and Electronic Arts have announced 'Mace Griffin Bounty Hunter', their upcoming sci-fi first-person shooter for the PC and the Microsoft Xbox. The game will let players assume the role of Mace Griffin, the only surviving member of a squad of elite soldiers brought down by a traitor. In his quest to uncover the truth behind his team's ruin, Mace becomes a bounty hunter.

Mace Griffin Bounty Hunter is in development at Warthog Entertainment, and it is scheduled for release this fall on the PC and the Microsoft Xbox.

Stay tuned to xboxaddict.com for the latest developments on this newly announced game title.
Source: http://www.gamespot.com/ 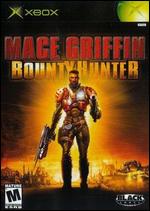