On April 26, 2002, armchair pugilists worldwide will experience unprecedented graphic realism with the unique PAIN(Polymorphic, Animation & Interpolative Node-mapping) damage engine used in Codemasters’ highly anticipated Mike Tyson Heavyweight Boxing. With gameplay that is aggressive, confrontational and immersive, Mike Tyson Heavyweight Boxing will, for the first time, deliver a videogame that extends the thrill and intensity of heavyweight boxing to the console gaming platform.

The PAIN engine offers an incredibly realistic, near-sim quality facial damage mechanism, which delivers dynamic visuals of boxers’ faces that show off the game’s ability to be the most intense boxing experience on a console to date. As gamers go mano-a-mano with any one of the featured boxers in the game, they are able to see their opponent’s sweat and blood materialize, as well as bruising and swelling from hard packed punches.

“Mike Tyson Heavyweight Boxing’s PAIN engine enables gamers to truly visualize the impact of their aggressive and powerful punches,” said Jon Hare, the game’s designer. “It’s incredible to be able to actually see what each of your punches are doing and utilize that in developing your fighting strategy.”

In addition to showing damage, the facial shaping technology of the PAIN engine also enhances the game’s uniquely flexible character creation system. In Mike Tyson Heavyweight Boxing players create up to four of their own custom boxers; manipulating nearly 40 different parts of the body and head, altering size and even appearance to choose their personal, physical and boxing attributes. With thousands of different character combinations, player’s can even create boxers in their own likeness.

Mike Tyson Heavyweight Boxing’ will make its debut on next generation console systems this Spring. 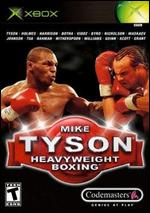