For the first time ever, Bruce Lee fans will be able to play as the master on a next generation video game console. The game, being developed by Ronin Entertainment, features an epic storyline reminiscent of Bruce Lee’s movies in which he battles multiple enemies to rescue his kidnapped father and retrieve the mystical Golden Relic, keeper of ancient martial arts secrets. Players must perfect a variety of martial arts styles including Lee’s signature Jeet Kune Do moves as they travel through action-packed gameplay levels set in locales such as Hong Kong and San Francisco.

"Drawing inspiration from the life and artistry of the incomparable Bruce Lee while taking full advantage of the Xbox hardware’s capabilities, ‘Bruce Lee: Quest of the Dragon’ will feature lush, 3D, hyper-detailed environments and lightning-fast gameplay at blistering frame rates," said Jim Wilson, president of Universal Interactive. "An innovative fighting system promises to deliver the gaming experience that Lee fans have long been waiting for." 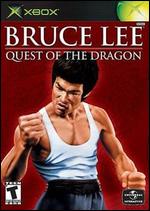