Sega Sports(TM), the brand that continues to set new standards in sports gaming, today announced the signing of New York Yankees(R) Jason Giambi to a multi-year deal to serve as the official spokesperson and cover athlete for the "World Series(R) Baseball" franchise. Sega Sports gamers also scored another "home run" today with the announcement that the highly anticipated "Sega Sports(TM) World Series(R) Baseball" video game which ships in May 2002, will be available exclusively on the Xbox(TM) video game system from Microsoft(R). Developed by Visual Concepts, the development house behind the sports video game revolution and makers of the acclaimed NFL 2K and NBA 2K series, "Sega Sports World Series Baseball" will deliver a baseball experience on Xbox that will be unmatched in the industry.

"The combination of these two announcements is a great win for sports gaming enthusiasts," said Tom Nichols, group director of sports marketing, Sega of America. "Not only will Xbox gamers have an exclusive on the best baseball sim for this year, but they can also enjoy the most realistic Sega Sports baseball experience endorsed by one of the best players in the league. We will be looking to leverage Jason’s expertise and knowledge inside `World Series Baseball’ over the coming years in order to make the game not only the best looking and best playing, but also the smartest baseball video game on the market."

As arguably the greatest player to hit the diamond in recent years, Jason Giambi’s athleticism and power both at the plate and on the field have captivated baseball fans all over the country. Giambi, who led Oakland to the American League West title last season, will participate in activities promoting the Sega Sports brand among consumers, which may entail involvement in the development of the "World Series Baseball" series and a presence in upcoming advertising campaigns. With this agreement, Giambi joins the long line of other athletic greats who have graced the covers of Sega Sports titles such as tennis stars Venus and Serena Williams, 76ers luminary Allen Iverson and U.S. Olympic hockey team member and Colorado Avalanche player Chris Drury.

"I’m thrilled to be a part of the Sega Sports team," Giambi said. "The Sega Sports brand is well-known among MLB players and video game fans as the most realistic sports video games. With my involvement, I’m hoping that I’ll be able to take `World Series Baseball’ to the next level and make it the predominant baseball video game in the industry."

"Sega Sports World Series Baseball" combines enhanced gameplay mechanics, next-generation graphics, advanced artificial intelligence, full team management and the most complete Franchise Mode of any baseball video game to result in the most authentic baseball simulation made to date. "Sega Sports World Series Baseball" also incorporates new fielding animations such as off-balance throws and new facial animations with over 50 different emotions, so that with each hit, error or home run, gamers will actually see the passion on the player’s face. New camera angles along with a broadcast quality presentation including new two-man commentary, brings the game to life like an actual Saturday afternoon game on T.V. "World Series Baseball" also includes the new Cooperstown Collection(TM) license so gamers can play as or against 25 of the greatest players ever to grace the game. With these and many other new features, "Sega Sports World Series Baseball" for the Xbox brings the gamer closer to authentic baseball action than ever before.

"Sega Sports has a legacy of creating some of the best sports games in the industry," said J Allard, General Manager, Xbox Platform. "The combination of the incredible graphics and gameplay of `Sega Sports World Series Baseball’ along with the high performance of the Xbox hardware makes this title a `must have’ for all Xbox owners. We believe that the strength and appeal of this game will make it one of the more anticipated game launches of the spring."
Source: http://www.sega.com/ 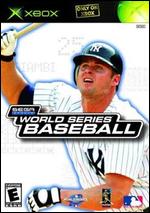