March 4, 2002-- Midway Games Inc., a leading software industry publisher and developer, announced today that Gauntlet Dark Legacy(TM) for the Nintendo GameCube(TM) will ship tomorrow and is scheduled to ship for the Xbox(TM) video game system from Microsoft in April. Gauntlet Dark Legacy is available now for the PlayStation®2 computer entertainment system.

Recreated for next-generation systems, Gauntlet Dark Legacy is a one-to-four player action-adventure videogame, which allows as many as four game players to battle cooperatively and interact simultaneously. Gauntlet Dark Legacy is the first and only videogame to offer this feature for the Nintendo GameCube. Continuing the time-honored ``hack-n-slash’’ style of gameplay, players work as a team as they embark on a quest to save the world. Using a force of special weapons, exotic magical powers and deadly combination attacks, players slay hordes of evil minions and hideous creatures - such as Golems, Dragons and Chimera - while searching for treasure, evading traps and solving the many mysteries of Gauntlet Dark Legacy.

Whether playing alone or with companions, players adventure through eight magical realms - Mountain, Desert, Forest and Castle and the new Ice, Town, Sky and Dream worlds. Throughout each mystical realm, players are challenged to find obelisks, rune stones and countless other items, while confronting more than 50 different enemies and challenging bosses. Players can choose from a variety of characters - including the new Jester, Sorceress, Dwarf and Knight - which possess the ability to perform special turbo attacks and deadly combination moves during battle. Each character has different attributes, so players must decide which character they believe is best equipped to handle the next adventure. Players can also find more than 21 secret characters and unlock their hidden, split personalities.
Source: http://www.midway.com/ 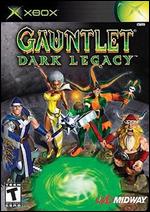 Xbox one no signal
Post by debrartin
0 Replies, 84633 Views