Ubi Soft® Entertainment, one of the largest video game publishers in the world, today announced plans to release Rayman® 3 Hoodlum Havoc in the U.S. and Europe this fall with availability on all next generation consoles and PC.

"Since Rayman's inception in 1995, I have been involved with the development of the Rayman games, and the team has already taken the franchise to new heights," said Michel Ancel, Game Creator, Ubi Soft Entertainment. "The extravagant imagination that has gone into the design of Rayman 3 Hoodlum Havoc will not only appeal to our existing fan base, but also attract a whole new group of players to the genre."
Source: http://www.ubisoft.com/ 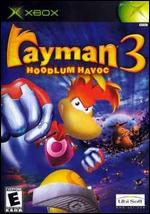 Xbox one no signal
Post by debrartin
0 Replies, 50715 Views