Ubi Soft® Entertainment, one of the world’s largest videogame publishers, today announced plans to develop and publish the next installment of the best-selling Rainbow Six series of games with Tom Clancy’s Rainbow Six®: Raven Shield.

Ubi Soft will release Rainbow Six®: Raven Shield on both the PC and the Xbox video game system in the fall of 2002.

The Rainbow Six franchise is known for its action-packed game play and heart-stopping realism, and Rainbow Six®: Raven Shield will continue the tradition. Developed by Ubi Soft’s Montreal studio, in close collaboration with Red Storm Entertainment, Rainbow Six®: Raven Shield features a brand new Tom Clancy storyline in which Team RAINBOW is led all over the world in a string of dramatic operations. The game will utilize graphics technology provided by the next-generation Unreal™ engine to power 15 new single-player missions that include the discovery of a cache of biological weapons and stopping an armed gang from terrorizing a London bank.

"Fans have been pleading with us for a long time to come out with another chapter in this blockbuster series of games, and Rainbow Six®: Raven Shield will be worth the wait," said Laurent Detoc, president of Ubi Soft Entertainment Inc. "The secrecy behind this project has been crucial to the evolution of the game. We’ll be ready to unveil all the action at the Electronic Entertainment Expo in Los Angeles this May."
Source: http://www.xboxaddict.com/ 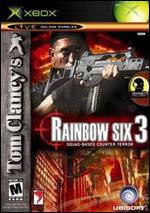 Xbox one no signal
Post by debrartin
0 Replies, 60841 Views