REDMOND, Wash. — March 8, 2002 — Microsoft Corp. today announced it will release “NFL Fever 2003,” its exclusive football title for the Xbox™ video game system, this summer in time for the start of the 2002 NFL season.

A smash hit in its rookie season, this franchise will include several new customization and presentation features and gameplay enhancements. In “NFL Fever 2003,” gamers can customize uniforms, playbooks and plays. “NFL Fever 2003” updates will include up-to-date rosters, the NFL’s new eight-division format, the new expansion team, the Houston Texans, and new stadiums for the Bears, Lions and Patriots. The gridiron game also will feature online capabilities.

The post-game highlight reel, which proved to be a big hit with gamers last season, will be expanded in “NFL Fever 2003.” Additional gameplay features, along with the “NFL Fever 2003” spokesperson and the in-game announcers, will be announced before the game’s launch.

NOTE: Click on "Product Profile" to show your eXcitement on this upcoming title.
Source: http://www.xbox.com/ 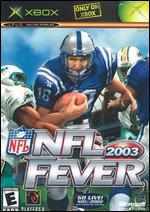