The gang over at Xbox Active had the opportunity to discuss Phantagram's upcoming title "Phantom Crash" with Director of Design, Ohta Kenji. Here's a taste:

XboxActive.com: In detail, could you tell us what Phantom Crash is about?

Ohta Kenji: The world of Phantom Crash is like this.

Tokyo, 30 years into the future. Citizens abandoned the megalopolis because of pollution and inhabitable environment. Areas like Shinzuku, Shibuya, or Aqualine were isolated to become "no man’s land." A new form of entertainment sprung and flourished in these areas, where contestants battle with robots called Scoot Vehicle, or Scoobee in short.

In the Quest Mode, you start out by joining the battle called "Rumbling." You buy your own Scoobee with cash (NY, New Yen,) and join the battle. Defeat the opponents with piloting skills and special abilities like "optic camouflage" or "air evasion." to earn the prize money and buy new Scoobees or parts for your own customized Scoobee. Eventually build the best Scoobee and defeat Local Champions and climb to the throne of World Champion.

In the VS Mode, you can have a multiplayer battle with up to 4 players on a split screen. You can use your own original Scoobee you built in the Quest Mode. 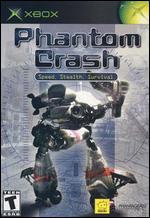