Located on the outer rim of a distant galaxy is a planet with deep secrets and a mysterious origin. This is Iron Star, a world inhabited by a society of robots. During a disaster in the science lab, a sinister robot with a mind of its own was created—the evil General Corrosive. After eliminating his makers, this powerful machine began to fulfill his dream of creating the ultimate army. Using his superior intellect, he took over a robot manufacturing plant and began producing a militia of robot minions dedicated to serving him. He called this new race the Mils. The pillage of Iron Star began shortly afterward as they overtook all of the robot manufacturing facilities to build more Mil soldiers. At this point the Droids, the working class robots of Iron Star, became slaves of Gen. Corrosive. You are Glitch, the gun-slinging, half-ton menacing bot of Droid City who blasts his way to victory. Found as scrap metal, but transformed into destructive machinery, Glitch is determined to free his people from the evil clutches of General Corrosive and his maniacal army of Mil bots. Unleash a world of pain as you annihilate the General's sinister plan to dominate the world, and salvage the robot race. Game Features

Click here to see the trailer!
(or right click/save as)
WMP Required! 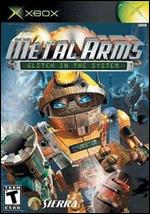