Legacy of Kain: Defiance to Xbox in Fall

A NEW LEGACY BEGINS Kain and Raziel unite in Legacy of Kain: Defiance Eidos Interactive, one of the world’s leading publishers and developers of entertainment software, announces Legacy of Kain: Defiance, the next installment in the multi-million selling Legacy of Kain series. The game is being developed by Crystal Dynamics and will be released on PlayStation 2 and Xbox in autumn 2003 For the first time in the series both Kain and Raziel will be available as playable characters in all of their blood sucking and soul devouring glory. They are pitched against the Hylden; a force so evil that these two embittered rivals must unite. Taking on the role of Kain and Raziel in alternating chapters, you must battle through a world loaded with conflict and intrigue in order to defeat the dark forces that threaten to condemn the land of Nosgoth to eternal damnation. Legacy of Kain: Defiance focuses much more on combat as Kain and Raziel confront hordes of monstrous enemies in fierce, fast-paced battles. The completely ’re-vamped’ combat system promises to be accessible, responsive and satisfying, allowing for non-stop action and thrilling combo moves unique to each character. The inclusion of the new ’telekinesis’ feature will play a fundamental role in not only deepening the combat system, but level and puzzle progression as well. A re-designed in-game camera will offer dynamic views of both the action and breathtaking environments. "With Legacy of Kain: Defiance, we are taking the series in a new direction, emphasizing heroic action while still preserving the game’s compelling story and adventure elements," states Amy Hennig, project director at Crystal Dynamics. "Our innovative new combat system emphasizes intuitive controls, over-the-top attacks and combos, powerful telekinetic assaults, and visceral finishing moves which draw from our heroes’ dark, vampiric natures." more... "Legacy of Kain: Defiance skilfully combines the strongest elements the franchise has brought to the video gaming universe," says Rob Dyer, president of Eidos Interactive US. "The combat, action, and story of Legacy of Kain will set a new standard in epic adventure gaming."
Source: http://www.xboxaddict.com/ 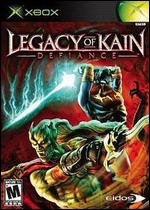