Take a band of gun-toting rebels - a robot, a madman, a mole and a criminal mastermind. Put them in a vividly stunning fantasy realm. Then give them an impossible mission - pulling off the biggest heist of all time in the middle of a war. All you have to do is battle your way through ugly grunts, wall-smashing Goliaths, evil monks, giant war machines and an army of psychopathic robots. But don’t worry; you have plenty of ammo and absolutely no common sense. Victory is yours in 12,000 bullets or less. Click here for the site. Features:
Source: http://www.lucasarts.com 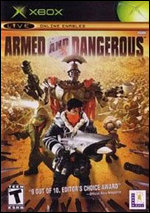 The Refolded edition has been updated with three brand new prequel chapters, starring a new character with its own unique transforming abilities.

In order to deliver the best possible experience, developers have decided to push the release of The Lord of the Rings: Gollum by a few months.

Lead a carnival of heroes to save steampunk Victorian London in this year’s most unique turn-based tactical RPG.

Alfred Hitchcock – Vertigo tells the troubled story of Ed Miller, a writer who escaped unscathed from a car crash in the Brody Canyon, California.

Xbox one no signal
Post by debrartin
0 Replies, 97331 Views