Eidos and Io Interactive have today released the first official information on Hitman: Contracts, which was previously known as Hitman 3: Contracts. The third-person action game is currently in development for PC, PlayStation 2, and Xbox, and is scheduled for release in spring 2004. Hitman: Contracts will see players reprising the role of Agent 47, a ruthlessly efficient contract killer who, at the start of the game, finds himself wounded and trapped in Paris. The game is being built using a new graphics engine, and will feature improved controls, a larger arsenal of firearms and close combat weapons, and a more gradual learning curve than its predecessors. "Hitman: Contracts will reveal a new side to Hitman," said Janos Flosser, managing director of Io Interactive. "The game will be epic, highly disturbing, but most importantly an enjoyable experience. The technology we are employing will make it one of the most advanced games on the market." We’ll bring you more information on Hitman: Contracts as soon as it becomes available. In the meantime, you might want to check out the game’s recently launched official Web site.
Source: http://www.gamespot.com/ 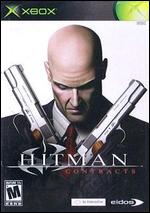 Xbox one no signal
Post by debrartin
0 Replies, 54651 Views