(RUMOR) - A Third Blinx In The Future?

Although Blinx 2: Masters of Time and Space still isn’t on its way out until this fall, developer Artoon is apparently already looking forward to a third title in the series. That’s the word from Microsoft’s recent European promotional tour, accompanying the announcement of the second Xbox adventure featuring Artoon’s anthropomorphic time-traveling feline janitor. Though the original Blinx wasn’t quite the hit Microsoft was hoping for, the sequel’s prospects are looking more favorable, and Artoon remains a valuable development resource in Japan, where Microsoft’s had to scramble for developer support. It’s not clear when they might set to a third Blinx adventure, though -- sooner for the original Xbox, or perhaps later for Microsoft’s next console.
Source: http://www.1up.com 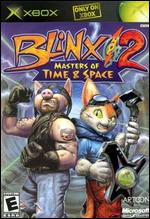