Well, let’s all hope that this Batman game is better than Catwoman and the other bat ridden games. Enjoy these screens!
Source: http://www.ea.com/ 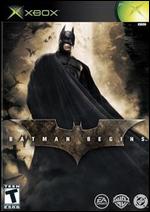