The latest installment of the world's top-selling soccer series, Winning Eleven: Pro Evolution Soccer 2007 is just one week away! Delivering its trademark realism to the Xbox 360™, PlayStation®2 system, PSP® system and Nintendo DS™, the game take soccer to all-new heights with online play on every platform, more real players and teams then ever before and new modes of play that will have you dribbling and shooting around the clock. Features The world's top-rated and best-selling soccer series is back for Xbox 360™, with Winning Eleven: Pro Soccer Evolution 2007™. Featuring additional international teams and new modes of play, including multiplayer over Xbox Live®, players from around the world can go head to head to find out who has the best moves in the greatest soccer game around! New moves: Brand new moves and smooth new animations truly bring the world's game home. New teams: Play in new professional leagues with famous club teams including Manchester United! New players: Take the field as any one of thousands of the world's best soccer players. New roles: Negotiate with your players as they develop, age, and retire in the multi-season Master League Mode
Source: http://www.konami.com/ 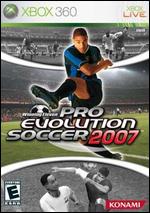