The History Channel(R): Battle for the Pacific video game from Activision, Inc. (Nasdaq:ATVI). History is brought to life in this authentic, epic experience as players relive famous conflicts fought on the intense battlefields of World War II. Told through the eyes of an American GI, the game features heart-pumping action, real WWII weapons and actual documentary video footage as players fight through a variety of territories including Guadalcanal, the Philippines and Iwo Jima.

"We’re thrilled to continue our collaboration with the award-winning The History Channel to deliver gamers with a new chapter in the WWII series," said David Oxford, Activision, Inc. "Everything in The History Channel: Battle for the Pacific from the combat and mission locations to the weapons and documentary footage is painstakingly researched, allowing us to deliver a cinematic war experience that is both incredibly exciting and accurate."

The History Channel: Battle for the Pacific thrusts players directly into the Pacific’s most historic battles of WWII. Utilizing real combat skills and authentic allied and axis weapons, including sub-machine guns, sniper rifles, anti-aircraft guns and grenades, players will be able to relive history and fight through missions based on actual battles. Additionally, players can go online on next generation platforms and the PC and play as an American or Japanese soldier in individual or team based modes such as elimination, deathmatch, team deathmatch and capture the flag. 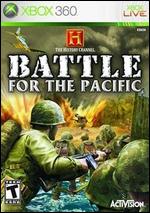