KOEI, recognized worldwide as the premier brand of strategy and action games, today announced that Dynasty Warriors®6 is slated to ship to North American retailers beginning February 19, 2008 for the Xbox 360® video game and entertainment system from Microsoft, and for the PLAYSTATION®3 computer entertainment system.

“Dynasty Warriors 6 will deliver the massive scale battles that gamers have come to expect from the series, and will push the envelope of Tactical Action. Our goal is to redefine the Dynasty Warriors series,” said Amos Ip, Senior Vice President at KOEI Corporation. “We’ve created more immersive environments where players can use the features of the battlefield to their advantage, larger armies with a presence and strategy befitting their superior numbers, and re-imagined characters with the most authentic kung-fu showcased in a way only KOEI can deliver. This is truly the next great chapter in the Dynasty Warriors saga.”

Set in Ancient China during the 3rd century, Dynasty Warriors 6 immerses gamers in a truly cinematic kung-fu action experience. Celebrated characters have been completely re-imagined with new weapons and fighting techniques motion-captured from some of today’s leading stuntmen and women in Asia. With the game’s new “Renbu” attack system and game controls, players can execute lightning-fast combos and the most dazzling fighting moves with ease.

Developed from the ground up exclusively for next-generation platforms, the game’s proprietary engine delivers the most chaotic and challenging Tactical Action experience to date. Players can use the landscape to elude the thousands of soldiers swarming the battlefield. But as players move and attack, adaptable enemy A.I. devises offensive and defensive combat tactics, and can retaliate with packs of fierce hunting dogs and patrol boats. All of the explosive action comes to life in high definition, 60 frames per second (fps) graphics.

Based on the epic novel, Romance of the Three Kingdoms, Dynasty Warriors 6 depicts the massive battles ignited by the fall of the Han Dynasty when three rebellious states moved to overthrow the Emperor of China.

Created by KOEI’s Omega Force team, Dynasty Warriors 6 delivers breathtaking visuals in 720p HDTV, and in-game Dolby®Digital audio. This game has not yet been rated by the ESRB. Dynasty Warriors 6 is for 1 to 2 players. Press can find (watermark-free) assets at gamespress.com
Source: http://koei.com/ 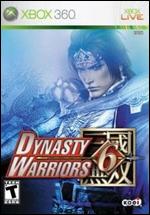