The Co-op Collection, as it’s titled, features an all-new co-op campaign comprised of five missions, and nine maps. Seven of those have been "inspired by classic maps from Ghost Recon’s illustrious history", while the other two have never been seen before. There are nine new Achievements to unlock, worth a total of 125 points.

The new campaign is set on the border of El Salvador and Honduras, where a rebel leader is attempting to destabilise the governments of both countries and overthrow their US-backed leaders. Because, of course, the US has an excellent record of picking tip-top blokes to run South American countries. Anyway, the Ghosts are being sent in to stop the uprising and, "If they fail, America’s efforts in the region could be set back by decades."

For a full rundown of each map, visit the Ghost Recon website. And if you’re still not sure whether GRAW 2 is your kind of thing, why not read our review. 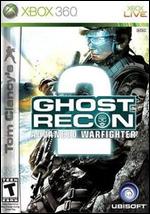