The machine, videoed by BBC technology editor Darren Waters, has clearly developed problems the outcome of which will be familiar to a large number of owners of the console - three red lights surrounding the unit’s power button. 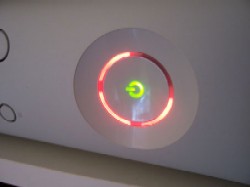 Writing on the BBC’s tech blog dot.life Waters references the hardware failure problem which could cost Microsoft up to USD 1 billion to deal with.

"Microsoft wants consumers to believe that its problems with the Xbox 360 console in terms of hardware failure are over. But wandering through the Game Developers Conference halls and it’s clear that the problem persists," he says.

"On Microsoft’s own stand at the show one of the demo consoles has a rather familiar problem - the red ring of death. There’s no way of knowing if this particular console was manufactured before or after Microsoft identified the problems with the machines.

"But at the very least it’s embarrassing for the company that its own stock of demo machines is still susceptible to the problem."