Last year, Rock Band was the only music game that enabled users to play as a full-fledged band. Things are different this year with Konami’s Rock Revolution and, more dauntingly, Guitar Hero World Tour. Ultimately, no amount of features or new equipment is going to matter. The real winner will be whichever game has the best track list. Harmonix and MTV must be fully aware of this fact, because today, the two released the full 84-song set list. Judging by the impressive list, Konami and Activision have reason to worry. This is easily the greatest assemblage of music in a game to date.

The big jaw-to-the-floor announcement is that Guns N’ Roses is set to debut a new song from the long-awaited album Chinese Democracy. It’s not just that Rock Band 2 has GNR -- it has new GNR and effectively announces the imminent arrival of the band’s oft-delayed album. Guns N’ Roses’ "Shackler’s Revenge" is just the tip of the iceberg for a track list that features far more greats (Bob effin’ Dylan!) than stinkers (Linkin effin’ Park?!).

Joining GNR and Dylan are such surprises as Tenacious D, Pearl Jam, Beck, Talking Heads, and The Replacements. The list isn’t so focused on spreading across decades as it is spanning genres. There’s a lot more heavy metal this time around and the music from the ’60s is better focused (and lacking the horror that is Green Tides and High Grass). Perhaps the only head scratcher is the inclusion of Norman Greenbaum’s "Spirit in the Sky," which most will recognize as an overused sports anthem.

Ah, but as great as this list may be, you love your old RB1 tracks and just don’t want to give them up. Fear not. All downloadable content will work with Rock Band 2 and gamers can export tracks from Rock Band 1 to RB2. That’s right -- from day one you can bring all RB1 tracks into RB2 to compliment your DLC as long as you own a PS3 or an Xbox 360 with a hard drive.

And there’s more. Harmonix actually wanted to toss in 100 tracks total for the disk, but couldn’t get them all in one time to ship for Xbox 360 by September. So this fall, MTV is releasing an additional 20 downloadable master tracks... for free. By year’s end this will mean RB fans will have access to more than 500 songs.

That is the sound of Activision gulping.

Check out the full list of tracks. Note that all tracks on RB2 are master recordings. There are 75 tracks from famous artists, plus nine bonus tracks from various bands that feature members of Harmonix.

Rock Band 2 hits Xbox 360 for a short exclusive window in September and then broadens with a holiday release on PS3, PS2, and Wii. It’s unknown if any cross-game functionality will exists for PS2 or Wii versions. 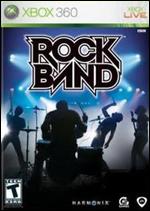