It’s no coincidence that EA Montreal’s Army of Two is prime material for an action movie.

The firm told Edge on Friday that’s how it was planned all along.

Asked if the studio kept in mind a screen adaptation when developing the game, Pat O’Brien, VP of EA Entertainment replied, "Yes. As we develop new IPs we have been learning to think about the IP as more than a game, as a potential cross-media franchise.

"That infuses the creative team’s thinking about story, characters and the world. This thinking was definitely part of the process while we developed [Army of Two]."

It’s a relatively new way to approach game development for EA, which recently signed an agreement with United Talent Agency.

EA released Army of Two in March this year. The game generated over $100 million in revenues, according to the publisher.

Today, EA announced that the game would be turned into a film, produced by Scott Stuber and EA. Scott Z. Burns, co-writer of The Bourne Ultimatum, will adapt the game for the screen.

The publisher also has a deal with 20th Century Fox for a movie based on the blockbuster Sims franchise.

O’Brien added, "EA Montreal has always been very excited about the possibility of adapting [Army of Two] into a film. The team felt that given the franchises’ captivating and politically-charged storyline it would work beautifully on the big screen.

"The whole team at EA Montreal could not be more excited to work with Universal to see this dream come to fruition." 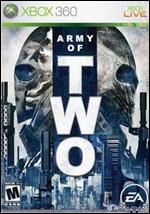