Black Box, an Electronic Arts Inc. studio announced today that Skate 2, the sequel to the genre-defining original game will hit retailers in North America on January 21st, 2009 and worldwide on January 23rd, 2009 – making it one of the first must-have games of 2009. Players that can’t wait until January can indulge their irrepressible Skate craving even sooner, with the Graphics Creator, a web-based customization tool launching next month on www.skate.ea.com. For those in North America anxious to shred the streets in blaring style can pre-order now for an exclusive code to unlock the Throwback Pack, a special upgrade pack that includes retro clothing, accessories and gestures.

The Graphics Creator is a web-based application that ups the ante in self-expression. With this tool, gamers have the freedom to create custom graphics for their in-game hats, decks and shirts, infusing their skateboarding experience with an unrivaled level of individuality. The Throwback Pack features a variety of retro stylings including, tie-dye t-shirts, Skate or Die apparel, Robot and ’Window Shade’ sunglasses, gestures circa the hippie-age and much more!

Skate 2 brings gamers to New San Vanelona, a city that’s been rebuilt after an unspeakable disaster five years ago. Equipped with double the bag of tricks, players are tasked to rebuild their career and revive the skate scene. Now with the ability to get off-board and move objects around, gamers can create their own epic spots and challenges which can then be uploaded, shared and experienced by others around the world.

Skate 2 ups the ante in delivering all the grit, creativity and culture of skateboarding with all-new tricks that allow players to truly skate it their way – on and off the board. Skate 2 is developed by Black Box, a studio of Electronic Arts in Vancouver, British Columbia and will be available on the Xbox 360 video game and entertainment system and the PLAYSTATION 3 computer entertainment system. The game is rated "T" for Teen by the ESRB and is not yet rated by PEGI.

Those that want to skate indoors over the holidays can enjoy Skate It with family and friends on the Wii and the Nintendo DS available in stores now. 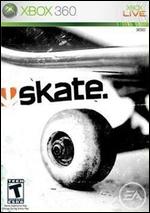