"NPPL Championship Paintball 2009 is the fantastic end result of a close collaboration between the NPPL, Activision, and top professional paintball players," said Scott Pierce, NPPL CEO. "No paintball game has ever been this real – it masterfully captures the competitive intensity that makes paintball one of the most popular extreme sports in the world."

Paintball is an extraordinarily deep sport that requires teamwork, strategy, and precision, something the game accurately represents. NPPL Championship Paintball 2009 features multiple game modes (including woodsball-based gameplay), officially licensed gear, and authentic tournament locations and field layouts from the NPPL, the Millennium European Paintball Series, and the XPSL. Players can perfect their skills as they progress from a rookie to pro in career mode and take on the best paintball teams in the world, or get online for an adrenaline rush of cutthroat multiplayer action. With deep design contributions from the NPPL, San Diego Dynasty and Bob Long, motion-captured player movements, and cutting edge ballistics, the level of detail and realism in this game is unmatched.

"NPPL Championship Paintball 2009 is a blast for both paintball fanatics and first person action fans looking for something fresh," said Dave Oxford, Activision Publishing. "We’re ecstatic to redefine the paintball experience in videogames."

More information is available at www.PbSting.com. 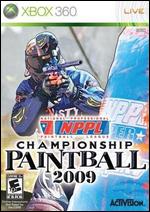