Have you been eagerly waiting for Alma, the spooky little supernatural girl from F.E.A.R, to haunt your gameplay once again? Fortunately, you won’t have to wait for much longer, because Warner Bros. Interactive Entertainment announced earlier today that the single player demo for F.E.A.R. 2: Project Origin will be available for the Xbox 360 and PS3 on January 22. Additionally, PC users can visit What is Fear.com to download the Games for Windows version on that day. However, if you happen to be a Qore subscriber, you can download the PS3 demo now, which will give players a glimpse of what to expect as they move through the bloody corridors and hallways of a ruined city.

F.E.A.R. 2: Project Origin picks up shortly before the ending of F.E.A.R. and places players in the boots of a member of a Special Forces squad on a mission in the city of Auburn. Unfortunately, the city is caught in a massive explosion caused by Alma, the mysterious girl from the first game who’s unleashed her power on the city. It’s up to the player to fight through their enemies and the supernatural occurrences thrown at them before things get out of hand. F.E.A.R. 2: Project Origin will hit shelves on February 10. 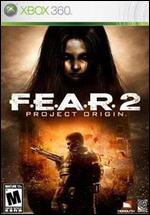