The number of games played daily represents a 321 per cent increase over the the previous title in the series, and makes FIFA 09 the most popular EA Sports game online.

In total, over 141 million games of FIFA 09 have been played on both the PlayStation 3 and Xbox 360 since the game’s European launch last September.

"Online is the next great frontier in sports gaming. We are seeing a record number of individuals globally playing FIFA Soccer 09 online so we are focused on developing games that maximise the online experience," said Andrew Wilson, vice president and executive producer for the franchise.

EA is now developing FIFA 09 Ultimate Team, a new game mode in which players build fantasy teams and compete with each other in online league tables.

"A dedicated team developed FIFA 09 Ultimate Team and they have created a game within the game, delivering a strategic new way to play FIFA Soccer 09 that will create hundreds of additional hours of playing time," Wilson added. 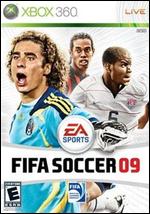 Xbox one no signal
Post by debrartin
0 Replies, 48477 Views