Earlier today Capcom supplied more details on the upcoming title (confirming that it will indeed deliver a co-op multiplayer campaign mode for up to four players).

Yet the publisher was fairly ambiguous regarding which consoles Lost Planet 2 would arrive on. Capcom stated the title is “being developed for the Xbox 360”, but didn’t go as far as say exclusively. Capcom was, however, not shy in reminding that the announcement was delivered “exclusively” on Xbox Live.

Edge contacted Capcom to bring clarity to the situation, yet a representative for the publisher could not take the opportunity to brand the game as an exclusive. “All we can say at this time is that we’ve announced Lost Planet 2 for the 360,” he responded. "That’s all I can say."

In September last year Capcom stated that "...all major titles launched during the next fiscal year or thereafter will be developed as multiplatform games.” 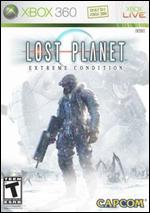