A demo for Wanted: Weapons of Fate is now available on Xbox Live and PlayStation Network for your consideration. The game, based on the movie, features moves pulled from the film such as curving bullets and assassin time. It continues the story laid out in theaters with an entirely new chapter in Wesley Gibson’s adventures.

The Wanted demo offers all of the tutorial levels as well as stages one and two of the Airplane level. Wanted: Weapons of Fate will be available on March 24 for Xbox 360 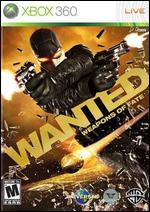 Xbox one no signal
Post by debrartin
0 Replies, 118014 Views