Motion-based control is coming to the Xbox 360. We initially thought Microsoft would be the first to the table but PDP beat them to the punch. The Gametrak Freedom from PDP will offer wireless motion-based controls using Microsoft’s proprietary wireless protocol. The Gametrak uses a 3D ultrasonic transducer and a three axis accelerometer to detect motion. You’ll also find a trigger on the under side, as well as the 360’s familiar four button configuration and a D-pad.

Unlike Nintendo’s solution, which uses one point of detection, the Gametrak uses two sensor bars that sit on opposite sides of the TV. Up to four wireless Gametrak’s will work with the sensors. PDP claims that the added sensor in conjunction with the Gametrak’s motion sensing technologies give the Gametrak accuracy to within 2mm of movement. Additionally the company states that Because the Gametrak detects motion in the x, y, and z planes it’s capable of considerably more than the Wii Remote or the PS3’s Sixaxis. 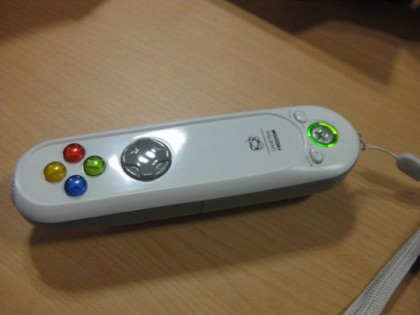 We got to briefly try out the Gametrak Freedom with Squeeballs, a game that PDP will bundle with the controller. Squeeballs is basically a variety/party game like Warioware, with elements of Cooking Mama thrown in for good measure. The controller certainly felt accurate, and we didn’t find it overly sensitive. Moving laterally while rotating the controller to twist onscreen objects actually worked without a super jittery feel. PDP says we should expect the controller out in the fall bundled with Squeeballs for about $70 to $75.