Prototype, the promising looking open-world superhuman game from Activision, has been given a firm release date, coming to European shores on June 5 with a North American release shortly after on June 9. 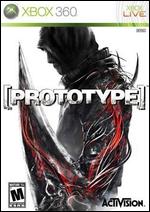