In a statement released by NBC Sports, Madden said, "It’s time. I’m 73 years old. My 50th wedding anniversary is this fall. I have two great sons and their families and their five grandchildren are at an age now when they know when I’m home and, more importantly, when I’m not. ... It’s been a great ride."
John Madden has been a fixture in the sports world for more than four decades, starting his football career as a linebacker coach at the Oakland Raiders in 1967. Two years later, he was named the head coach of the Raiders, and eventually led the team to seven AFC West titles as well as a victory over the Vikings in Super Bowl XI. His overall coaching record of 103-32-7 is still a record for any coach in NFL history with a win percentage of .750.

After his retirement in 1979, he joined CBS as a broadcaster, where he worked until 1994. When CBS lost broadcast rights to NFL games, he switched to Fox and worked there until 2002, when he became the lead analyst for ABC’s Monday Night Football. When NBC took over the primetime Sunday night game in 2006, he switched networks for the final time. His last broadcast game was Super Bowl XLIII between Arizona and Pittsburgh. Over his entire career as an analyst, Madden also managed to win sixteen Emmys for Outstanding Sports Analyst/Personality, and was elected to the Pro Football Hall of Fame in 2006. Replacing John Madden in the booth at NBC with Al Michaels will be Cris Collinsworth, who has filled in for Madden this past year.
Madden has also had a significant impact on the gaming world. The Madden NFL Football franchise is widely known to be the top selling sports series of all time, and recently celebrated its twentieth installment. But what does Madden’s retirement mean to the acclaimed franchise from EA Sports? Will it continue in the same format, or will it change to reflect the exit of the legendary analyst? The speculation is obviously going to swirl around what steps will be taken in the wake of Madden’s departure from the booth. While it may not wind up affecting Madden NFL 10, which has been in production for quite a while, this could significantly affect development of Madden NFL 11. John Madden’s visible role with the title has been diminishing over the recent years, with Madden no longer contributing in-game commentary. In fact, with the exception of "Cyber Madden" to test a player’s skills in Madden NFL 09, the game is virtually Madden in name only.
The retirement raises two separate and obvious paths that Madden NFL 11 could go. Madden has admitted that he "still loves all aspects of the game," which is the reason that it took months to come to the decision to retire. Without having to worry about driving the Madden Cruiser around the country on a weekly basis during the football season, it’s possible that he could assume a larger consultant role on his game, adding additional coaching features and even revamping other EA Sports franchises like Head Coach. The other direction revolves more around Cris Collinsworth. Since Collinsworth seems to have been groomed as the heir apparent of John Madden at NBC, will this extend to EA Sports as well? Collinsworth’s additions to last year’s game was rather notable, as he did commentary with Tom Hammond, and was instrumental in breaking down plays with the EA Sports Backtrack feature to help players learn from their mistakes. But to be blunt, Collinsworth NFL 11 doesn’t have the same ring to it that Madden NFL 11 does. Clearly, these are all speculative ideas regarding the future of the franchise, but they do raise significant questions that all football fans would want to know.

When we contacted EA Sports President Peter Moore, he issued this statement, "John is a true sports icon who has made an indelible impact on the sport of football which will be felt forever. His prolific coaching and broadcasting careers, as well as his distinct role in shaping the EA SPORTS football experience have redefined how multiple generations have come to know and love the sport with unrivaled passion. We’re excited to see his legacy live on in the 21st year of Madden NFL football, and well beyond. It’s been a privilege for EA SPORTS to have had the strong relationship we’ve had with John for more than two decades and one that will continue into the future." 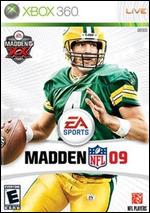