DYNASTY WARRIORS:GUNDAM 2 Has Been Shipped

In the future, rebel space colonies launch a brutal war of independence with a series of coordinated orbital strikes against Earth. The chaotic assault signals the dawn of a new age of combat and the ultimate instrument of warfare is born, the Mobile Suit.

DYNASTY WARRIORS:GUNDAM 2 thrusts players into incredible battles against legions of enemy Mobile Suits on distant planetary surfaces and in the far reaches of outer space. For the first time, DYNASTY WARRIORS:GUNDAM 2 let players engage in melee battles against colossal enemies such as the Psyco Gundam. The massive Psyco Gundam can quickly reconfigure their bodies into titanic mobile fortresses which can move with remarkable speed. However, highly-trained pilots can utilize their own Mobile Suit’s speed, agility, and of course firepower to defeat these deadly juggernauts.

DYNASTY WARRIORS:GUNDAM 2 also includes new stories and features Mobile Suits spanning Gundam’s anime history including Char’s Counter Attack, Gundam Wing and more. With Mobile Suit parts collected throughout the course of the game, players will be able to construct new Mobile Suits to take into battle. Additionally, players can take their favorite Mobile Suits and engage others in action-packed online versus modes on Xbox LIVE for Xbox 360 and the PLAYSTATION 3 system’s PlayStationNetwork.

Developed by KOEI’s award-winning Omega Force team, DYNASTY WARRIORS:GUNDAM 2 has an ESRB rating of "T" for Teen. The game carries a suggested MSRP of $29.99 for PlayStation 2 and $59.99 for Xbox 360 and PLAYSTATION 3. For more information please visit www.namcobandaigames.com, www.dynastywarriorsgundam.com, or www.koei.com . 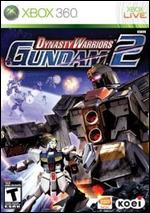