If you saw the first Dead Rising 2 trailer and found yourself thinking, "How come Frank’s hair is blond," here’s the reason. The character you were looking at wasn’t the original’s Frank West, but the all new hero for the sequel. And his name is...

Weekly Famitsu got the scoop on Chuck and more in its latest issue.

Aside from the name, little is known about the new character. However, the magazine does reveal that his profession will be connected to the gameplay somehow, similar to how Frank, a photo journalist, took pictures to build up experience. So what’s Chuck’s profession? That’s currently being kept under wraps.

The key word for this week’s update is "volume up." As in take the original Dead Rising, up the volume, and you’ve got Dead Rising 2. The game will retain the basic concept of the original: surviving the flood of zombies for 72 hours. You’ll, of course, be able to grab all varieties of objects from your surroundings to bash in zombie brain. This is where the volume up comes into play, as the game promises more weapons and vehicles for your use. The zombies are also getting a volume up in terms of their numbers, so they won’t necessarily be at a disadvantage.

One area that will be going in the reverse direction is loading. The game promises less loading thanks to updated tech. On a note relating to the loading, it appears that fallen zombie bodies will remain in place while you explore a single area. The bodies clear out only when you move beyond a loading point.

Famitsu managed to sneak in a few words with producer Keiji Inafune, who was unfortunately a bit on the shy side with specifics. He wouldn’t share Chuck’s precise job, although he did confirm the presence of a new form of gameplay relating to the job. He also wouldn’t clearly respond to a question about the game’s slot machines being playable.

Most unfortunately, he dodged a question about network support, stating only that Capcom is looking into it.

Development on Dead Rising 2 is currently half way done, said Inafune. Capcom is aiming for a simultaneous worldwide release. 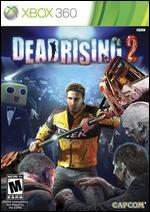