MIDLOTHIAN, VA - SouthPeak Games announced today that Velvet Assassin for the Xbox 360 video game and entertainment system from Microsoft and Windows PC has gone gold and will be shipping next week.

"World War II is such a common theme amongst games in the last ten years, but it’s truly rare to find a title that brings gamers into the visceral reality of what happened," said Richard Iggo, Vice President of Marketing at SouthPeak Games. "Velvet Assassin excels in its ability to make players feel something more than just gameplay."

Velvet Assassin brings players into the world of Violette Summer, a British secret agent behind enemy lines in multiple hot-spots during World War II. Players are introduced to a bed-ridden Violette as she slips in and out of fevered dreams, reliving her most poignant missions through her memories. With no outside support, Violette must sneak her way into heavily guarded Nazi strongholds, assassinate high-level targets and even deliver cyanide to fellow operatives caught in the field. Using true-to-life weapons and tactics, Violette is one of the few people standing between the Nazi war machine and total domination. Velvet Assassin asks players to focus on the reality behind these clandestine acts, with no technological marvels, no special weapons, just your wits and the equipment on hand.

Velvet Assassin will be shipping to retailers on April 30th, 2009. 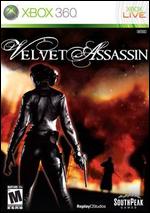