1. Personality - a player’s driving style determines whether they are an aggressive or precise driver.

2. Success - as in every race, the ultimate goal is to finish at the top of the podium.

4. Badges - these unique icons bring individuality and style to each player’s driver profile, as each player races and completes top achievements.

As a player’s driver profile develops through the course of the game, it creates rivalries, triggers specific challenges and even unlocks vehicles and customization options. Need for Speed SHIFT’s multiple reward systems keeps players in each race regardless of their position.

"The new driver profile feature in Need for Speed SHIFT gives players full control of how they progress through game," said Patrick Soderlund, Senior Vice President of EA Games Europe. "In SHIFT, how you drive is who you are behind the wheel." 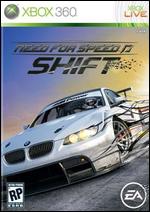