It’s been a long time between missions, but Sam Fisher is back – and thankfully sans-hobo beard. Revealed officially at Microsoft’s E3 2009 press conference and later replayed at Ubisoft’s, Splinter Cell: Conviction looks like the fresh direction the series desperately needed – but it goes even further, pointing the way forward for cinematic and practical storytelling and stealth gameplay.

With a haircut and some botox, Sam Fisher is embracing middle age with all the grace and scene-chewing presence of George Clooney. Fisher, no longer bound by his old government employ, is free to extract revenge for the apparent murder of his daughter, Sarah Fisher. The first thing we noticed was the speed and efficiency of Sam’s movement; he has more pace to his step than previously, and the trade-off is a lessened emphasis on stealth, since the body count restrictions are now gone. In other words, during the Mansion Infiltration mission, there was a lot of headshots and biffo. That’s a great thing, too.

From the outset, there’s an all-new, hard-edged attitude to Sam Fisher. Grabbing and interrogating a suspect has more to do with beating their heads against porcelain urinal basins and brick walls than carefully worded diplomacy. With that in mind, the environment has been built to be far more context-sensitive than in the past – described as ’sandboxy’ by Ubisoft.

For instance, when breaking into the mansion, you can either head in all-guns-blazing or shimmy up a wall and use stealth. If you take the stealth option, not only does the game shift things up with an Assassin’s Creed-like level of verticality and mobility, but you an also use environmental objects like chandeliers to take out a few enemies at once and turn out the lights in the process.
bathroom scene 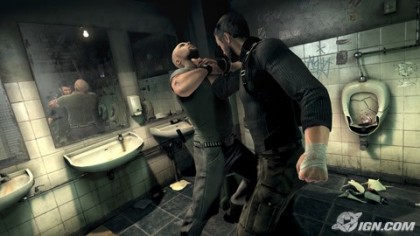 One of the biggest changes to the gameplay formula comes in the form of ’Mark and Execute’ attacks – at once upping the frenetic action and streamlining it. In some ways bearing similarities to Fallout’s VATS (Vault-Assisted Targeting System), Mark and Execute allows Sam to peer under doors (and presumably around corner and over objects too), gauging the locations of his enemies and targeting them for near-automatic headshots when you burst through the door or into the line of fire.

The result is a faster, more strategic level of action that takes de-emphasises some of the raw shooting aspects for those who’d rather just get on with exploration. It also adds a bit of variety – and we can imagine a few cool scenarios where the tool might prove more useful too.

After four years of development, Splinter Cell: Conviction is a thing of beauty, to be sure. Polished graphically to utterly triple-A levels of sophistication, it’s the smaller details that really left us impressed. For starters, cutscenes are handled entirely in-game and storytelling is a blend of traditional cinematic sequences and, impressively, actual text overlays in the environment.

For example, if Sam’s currently pressing a suspect for information (by throwing him through a toilet cubicle door or similar), the walls will be painted with words relating to what he’s thinking about or short movie reels about the death of his daughter, since it’s playing on his mind too, giving Fisher his motivation.

The game guides you to your next objective by plastering keywords on objects in the world; the word ’MANSION’ stands five storeys high against the night-time backdrop, showing you your next waypoint. It’s handled with an almost comic book-like blend of words, images and actions to build up a very fresh feeling storytelling method.

If Splinter Cell: Conviction has some gameplay convictions of its own, it’s that simple is best. It’s an approach that explains not just the introduction of the storytelling text and video overlays, but it also extends to things like discerning which objects in the environment are useable and which aren’t. When Sam’s hidden in shadows, stealthing along like the ex-spy he is, the environment’s colour actually drains away – except for key useable objects in the world. Enemies also stand out against the background in this same manner.

It’s an intuitive system that keeps you immersed in the environment, reminding you that it’s critical to study and interpret the world around you before making any rash decisions. As in previous games, the world’s context-sensitive objects all bring up options on how to use them. Simply press the corresponding button to perform that command. However, combat now seems to feature a similar, albeit more streamlined system of context options too.

Most importantly, all of the text overlays, pop-up context options and combat manoeuvres keep the HUD to a minimum – and that means more immersion for the player. Prepare to lose yourself all over again later this year.