Exclusive features to CSI: Deadly Intent – The Hidden Cases for the Nintendo DS system let players solve additional bizarre cases through an enhanced questioning system and game mechanics with unique touch gameplay. Players will feel like a real CSI character with heart-pounding interrogations, stylish visuals and a unique story structure that unveils the shocking truth when all the cases are linked together.

"Ubisoft is pleased to give CSI fans an authentic crime-solving video game with CSI: Deadly Intent," said Tony Key, U.S. senior vice president of sales and marketing at Ubisoft. "CSI: Deadly Intent’s intriguing cases, realistic graphics, enhanced character acting and precise lip sync with the voices of the actors from the show will provide fans the lifelike experience they are looking for in a video game based on a television show."

Game Features:
JOIN THE NEW CSI FAMILY… and partner with the cast of the CSI Season 9, including new characters such as Ray Langston (Laurence Fishburne) and Riley Adams (Lauren Lee Smith). Be prepared to work with your partner as a real team, working together on the crime scene or helping each other during tough suspect interrogations.

PUT YOUR EXPERTISE TO THE TEST… as you play one of the most skillful forensic experts to join the Las Vegas CSI team. For the first time ever in the CSI video game series, help other detectives in their investigations and gain their respect through your actions and teamwork.

PERFORM THE TASKS OF A CSI DETECTIVE…collect evidence at the crime scene, search for items that might be related to the case and unveil hidden evidence through observation. Interview witnesses and suspects with an improved interrogation system for more realistic character interaction.

ANALYZE THE EVIDENCE WITH THE LATEST TECHNOLOGY… use DNA and microscopic analysis and much more. 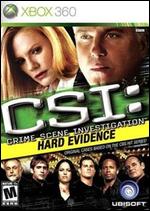