There still remains much to be known about the forthcoming sequel to Call of Duty 4: Modern Warfare, Call of Duty: Modern Warfare 2, but Infinity Ward’s Robert Bowling has been kind enough to quietly slip out little tidbits here and there to keep the hardcore fans satisfied. Just last week, Bowling delivered the first look at the Prestige Edition of the game in a Twitter post, which caused a significant stir throughout the gaming industry press. Today in what appears to be an outreach for fan feedback, Bowling made a brief post about a special edition Modern Warfare 2 controller. 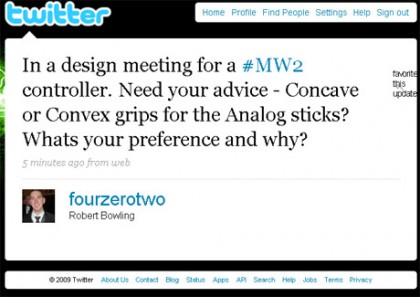 In a design meeting for a #MW2 controller. Need your advice - Concave or Convex grips for the Analog sticks? Whats your preference and why?

The post leaves many questions, like for instance: will the controller be a specific console exclusive? Will it be produced in mass quantities or a limited edition? Clearly the product is still in its early development stages, but we expect to hear more about the controller as the game nears release.