Penance, the whiny afterbirth of never-been-cool character Speedball, is coming to Marvel Ultimate Alliance 2. The angst-ridden hero was announced at a Comic-Con panel Saturday with a brand new trailer that showed off his particular skill set.

For those who didn’t read the Civil War series a few years back, Penance believes himself responsible for the tragic deaths of several hundred people in Stamford, Connecticut. At the time of the incident, which launches the Civil War storyline, he’s known as Speedball. By the end of Civil War, he’s put himself in an iron maiden suit that punishes him every time he uses his powers. [Insert eye roll here.]

Most comic fans found Penance to be, well, incredibly dumb and one of the worst parts of Civil War. It makes sense to have him in the game, though, as he was a part of the story that’s being told. Will you play as him? That choice is up to you.

Two more characters in Ultimate Alliance 2 are set to be revealed in the coming month with a third and final character "never to be announced." Fingers crossed that you get to play as Galactus 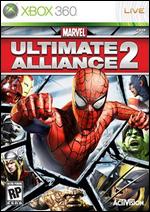