We knew that Resonance of Fate was coming to North America and Europe in 2010. RPG fans will be happy to know though that it appears that the new Sega/tri-Ace collaboration will be arriving in both markets at the same time.

He went on to describe the release window, saying, "Usually the European version comes a year after, let’s say the Japanese release. During the year, a lot of people are going to be like, well this is old news now. We’re going to be losing a lot of interest if there is such a long time as a year."

"We’ve scheduled it in so we can get it out as quick as possible."

Resonance of Fate is known as End of Eternity in Japan, and it’s currently slated for a fourth quarter release. It marks the first collaboration between Valkyrie Profile developer tri-Ace and Sega, and is set in a future megapolis called Bazel, which is divided by class.

Look for it on the PlayStation 3 and Xbox 360 next year. 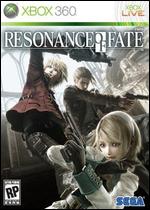