Good news, skateboarding fans: It turns out that Activision’s and Robomodo’s upcoming new entry in the Tony Hawk franchise, Tony Hawk Ride, will actually feature skateboarders. Activision announced the full roster of skaters that’ll appear in the game, including both the famous and the lesser known:

Tony Hawk Ride is set for release in October. 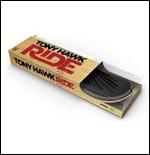