Santa Monica, CA – August 18, 2009 – Activision Publishing, Inc. and id Software announced today that the highly-anticipated Wolfenstein™ is now available nationwide for the Xbox 360™ video game and entertainment system from Microsoft, the PLAYSTATION®3 computer entertainment system and PC.  Developed by Raven Software, Wolfenstein is rated “M” for Mature by the ESRB.

Combining intense action and stunning graphics, Wolfenstein picks up immediately after the events of the award-winning Return to Castle Wolfenstein.  In the newest chapter to the famed franchise, the Nazis’ have returned to their dark experiments and unearthed a dimension that contains amazing powers, simply known as – The Veil. With the help of the resistance faction of the town Isenstadt, players return to enlist as super OSA agent BJ Blazkowicz to uncover the Third Reich’s evil aspirations and stop them before it’s too late.

“It’s been great to work with Raven Software on an ambitious title like Wolfenstein,” said Kevin Cloud, executive producer at id Software. “The latest chapter delivers an epic gameplay experience by seamlessly blending intense combat throughout a compelling sci-fi narrative that brings the occult underworld to life as only Wolfenstein can deliver.”

As players embark on an all-new mission deep in the heart of the Third Reich, they will have access to an arsenal of upgradable conventional and sci-fi weapons, while battling a multitude of escalating enemies, from Nazi combat troops and super soldiers to paranormal forces and experimental creatures.

Following in the footsteps of its predecessors, the Wolfenstein multi-player experience features the Axis and Resistance squaring off against each other in Team Deathmatch, Stopwatch or Objective based games. With three classes from which to choose, players can fight on the frontline as a soldier, heal their compatriots as a medic, or help gather objectives as an engineer all while using the Veil powers in special ways. Additionally, the persistent gold found within the multiplayer maps allows players to purchase upgrades for weapons and Veil powers on the fly, ensuring a deep and continuous variety of action along with tremendous replay value. 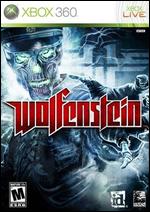