2K Sports today announced that NBA 2K10: Draft Combine, a download-only experience offering fans pre-season basketball excitement leading up to the launch of NBA 2K10 this fall, is now available for Xbox LIVE Arcade for the Xbox 360 video game and entertainment system from Microsoft.  For the first time, NBA 2K10: Draft Combine will allow fans to create their own custom player and experience the on-court life of an NBA hopeful going through the NBA Draft Combine at the world-renowned ATTACK Athletics gym in Chicago.

“We’re thrilled to provide this opportunity for fans to get an early taste of NBA competition before NBA 2K10 launches this fall,” said Greg Thomas, senior vice president of sports development for 2K. "They will be able to build their own custom player from over 300 different signature customizations, and later use them in NBA 2K10’s all-new My Player career mode that will allow fans to continue their journey to become an NBA legend."

· Building custom players and increasing their NBA stock through a variety of challenging basketball drills and 5-on-5 games.

· Over 300 different signature customizations, including player-specific shooting animations, and dunk and dribble packages to give each created player his own unique personal style.

· Ability to strengthen all parts of the created player’s game through a variety of drills, such as shooting, post offense and defense, attacking the basket, dribbling, challenging shots, and boxing out for rebounds to progress through the NBA Draft Combine.

· Organized games that allow players to gain valuable skill points by offering a variety of specific in-game objectives to be accomplished. A full analysis will be available for gamers to review their player’s performance and strategize further improvement.

· All players created in NBA 2K10: Draft Combine will wear a special patch on their uniform throughout the rest of that player’s career to denote that they have completed the NBA Draft Combine.

· Online leaderboards to track the highest ranking custom built players, so fans can gauge how their player stacks up against the competition.

· Fans can take their custom built players from NBA 2K10: Draft Combine and use them in the all-new My Player career mode in NBA 2K10 launching this fall.

NBA 2K10: Draft Combine, developed by Visual Concepts, is now available for Xbox LIVE Arcade for Xbox 360 for 400 Microsoft Points in North America, Hong Kong, Singapore, Taiwan and India. The title will be available in North America and Korea on September 3, 2009 for the PlayStation®Network for PLAYSTATION 3 system for $4.99. For more information about NBA 2K10: Draft Combine, please visit www.2ksports.com/games/nba2k10dc

2K Sports is a division of 2K, a publishing label of Take-Two Interactive Software, Inc. 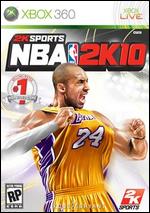