NPD sales numbers just arrived on our desks and one undeniable fact that we could glean from the data is that people still enjoy Madden football.

Madden NFL 10, which launched on August 15, sold just shy of one million copies on Xbox 360 and a hair more than 650K on PlayStation 3. While the number of Xbox 360 copies sold was down just slightly from last year, PS3 increased its year-over-year sales by about 20K copies.

Sadly the same good news does not spread to the PS2 and Wii versions of Madden NFL 10. In August 2008 Madden on PS2 sold over 400K units, while this year it was only able to push a bit more than 150K out the door at retailers. The decline wasn’t as large for Madden on Wii, but it’s certainly notable. Last year the game was in the top ten for game sales, but this time around it dropped out of the top 10 on the list with total units sold dropping significantly.

The drop in PS2 sales is understandable because of the relative age of the system, but the decline in the Wii version is more interesting considering the game took a different approach this year. It was streamlined, leaving out many of the hardcore features gamers have come to expect from Madden including a Franchise Mode that can only be unlocked through a cheat code. 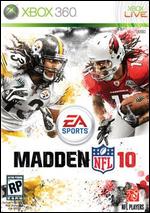