Forza Motorsport 3 isn’t out until October, but eager racing fans can get an early taste later this month when the Forza 3 demo hits Xbox Live.

Forza 3 has gone gold, and to mark the occasion, Microsoft and Turn 10 have announced that a demo for the game will be hitting Xbox Live on September 24th, giving players over a month to familiarize themselves with the game in advance of the October 27th release date. The demo features five cars ready to race on the Camino Viejo track in the mountains of Spain.

The five cars playable in the demo are:

All five can be driven in full cockpit view, with rollover, damage, and the game’s new rewind feature firmly in place. The demo also supports online leaderboards, so you can start bragging a little bit earlier. 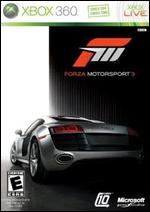