Iggy Pop Featured As A Minifigure

Warner Bros. Interactive Entertainment and MTV Games today revealed that LEGO® Rock Band™ will feature the likeness of Iggy Pop, legendary rock innovator and former Stooges front man, as a LEGO minifigure.  Fans can play as Iggy Pop while singing his song “The Passenger,” which will be included in the play list.  In addition, Rock Band pupils the world over can learn how to play the game as the iconic star’s voice walks players through the tutorial.

LEGO Rock Band puts the power of Rock into the hands of tweens, teens, families and gamers of all ages as they go on a wild journey to rock stardom to “Build a Band and Rock the Universe.”  Developed by TT Games in partnership with Harmonix, for the Xbox 360® video game and entertainment system from Microsoft, PLAYSTATION®3 computer entertainment system and Wii™ home videogame console. LEGO Rock Band for Nintendo DS™ is co-developed by TT Games and Harmonix in partnership with Backbone Entertainment, a Foundation 9 Entertainment studio.  All versions are scheduled for release holiday 2009. 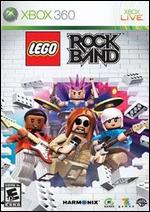